In answer to the Quora question: "What are parallels that can be drawn between capitalism and spirituality?"

Thank you for the A2A.

In my view, spirituality and capitalism are completely antithetical, and any parallels would be superficial and without real substance. Of course, we would need to be specific about which kind of spirituality is being compared and contrasted with which kind of capitalism, so I will use general spiritual principles found in many world religions for the one, and Western-style state capitalism for the other: 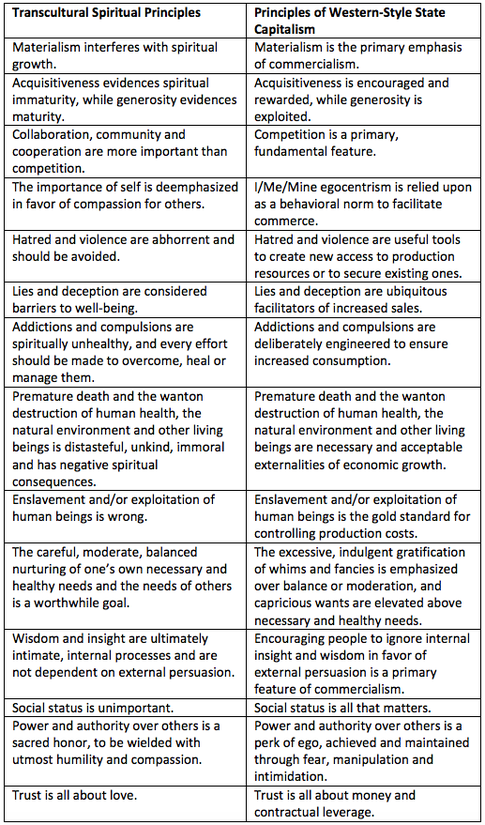 These (and many other examples, if I had time to write them all) are why capitalism in its current manifestation can never become more spiritual, and why spirituality is always, without exception, corrupted by capitalism.

UPDATE: Thank you Anish for adding your additional points below the question and inviting my feedback. Here is what I would say to each of those:

According to Milton Friedman (economist) socialism (which is mostly revered close to spirituality) imposes one's thought on other , but capitalism and spirtuality both call worldly restrictions as blaspheme or unnecessary and encourage the idea of free thought and free will.


1) Milton Friedman is certainly revered here in the U.S. by neoliberals and other ultra-conservative pro-capitalist ideologues, but his views have always been considered extreme. Yes, Friedman has been incredibly influential in formation and support of ultra-conservative viewpoints about economics, but he is one of many data points in a broad spectrum of free-market economic approaches. That said, even from a Libertarian perspective the rule of law is necessary for orderly commerce; free markets have never been "free and unfettered," and government regulation has always played an important role in maintaining a reliable monetary system, securities exchange, infrastructure and so forth. This would be a very lengthy post if I went into adequate detail, but there has never been the kind of market economy Friedman idealized, and there never will be, because markets rely on government to create all of the support systems (power grids, communications standards, banking standards, transportation infrastructure, court systems, etc.) on which capitalism relies to function at all. Some of Friedman's own substantial contributions to modern economics are his views on monetarism...which presupposes a strong element of central planning (i.e. socialism) in the economy. So in a sense his political views contradicted his pragmatic contributions; his professed beliefs were trumped by economic realities.

2) This point is completely erroneous and has no basis in fact. If you are referring to Communism, that has only been implemented as violently authoritarian Marxist-Lenism, which is just another form of state capitalism that has little resemblance to democratic socialism. Most "socialist" manifestations today are democratic mixed economies, the EU and the U.S. among them. And it is these democratic mixed economies - with elements of both free markets and strong central planning - that have done the most good for the poor. Wherever government regulation and socialist institutions have been dismantled via the inspiration of Friedman and others (i.e. what occurred under Reagan in the U.S. and Thatcher in the UK), the poor have suffered the most. More recently we have seen how disastrous austerity programs have been for struggling economies. Even in former Soviet states, post-Communist free market economies have drastically impaired heath, education and economic opportunity among the poor. So again, on this point you are simply 100% incorrect.


3) Here again I think you are confusing the benefits of constitutional democracy, civil rights and strong civic institutions with the affluence of capitalism. The economic opportunity and enrichment that occurs without government regulation, a flourishing civil society and democracy inevitably ends up in the pockets of a few very wealthy people, while everyone else scrambles desperately for scraps as an increasingly disenfranchised underclass. This is precisely what has happened in former Soviet block countries. Even here in the U.S., as wealth inequality increases as traditions of democracy, civil rights and socialized services are eroded by plutocrats, civil society has begun to destabilize and push back against the oligarchs. I would agree that trade does connect diverse cultures, but diversity has often been diluted by the homogenous commercialism of large corporations.

So, as I said initially, spirituality and capitalism cannot be related - in any way that is substantive that I can see. Capitalism does not operate in a vacuum, it relies on democracy, the efficiency and scope of certain socialized services and infrastructure, and reliable civic institutions. These are what have benefitted the poor, and the current form of state capitalism has just provided a wealth generation engine that, incidentally, only works because it exploits cheap labor and easily available resources. And as inexpensive labor and natural resources become more scarce, our current form of growth-dependent capitalism becomes less and less efficient as a means of wealth generation that can benefit society as a whole.