First off, it’s much worse than this question supposes. Majority Republican states in the U.S. are by far the largest beneficiaries of ALL government programs. There are some exceptions to this pattern, like New Mexico (which is more of a swing state), but in general it is Republican-majority “red” states who rely the most heavily on socialized support systems. Some detailed recent data on this can be found here: Most & Least Federally Dependent States. There are many simple comparisons you can find around the web, and here’s an example: 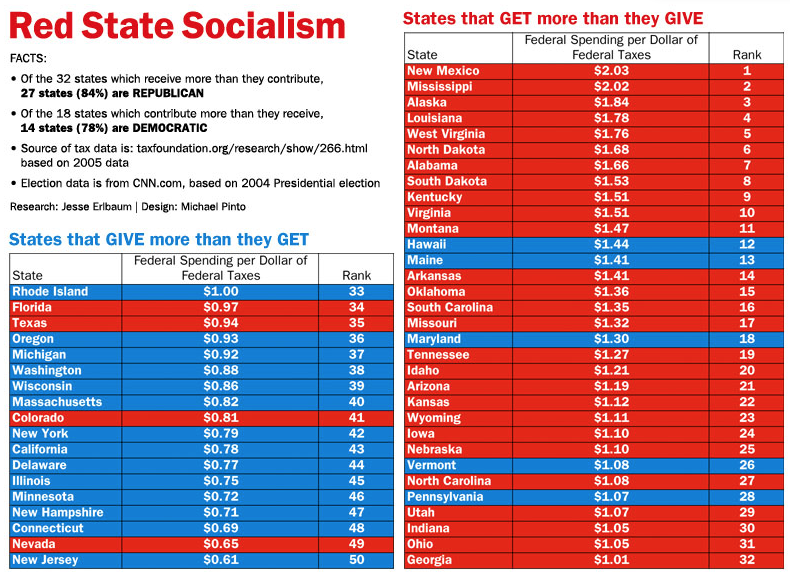 Now, many of the posts in this thread quibble over what “socialism” actually is. In short, it is widely acknowledged by everyone who studies political and economic systems and history that there are many different forms of socialism, and the strict and narrow “dictionary definition” of socialism (or capitalism, for that matter) that folks like to use in their arguments simply isn’t sufficient. The fact is that the U.S. and most other affluent, developed countries in the world are “mixed economies” of both socialism and capitalism. I’ve broken things out into a bit more detail here: What are the different forms of socialism?

So the reality is that, yes, Republicans who claim to be opposed to “socialism” regularly depend on socialism to survive and thrive.

BUT — and this is a pretty major caveat — those same Republicans are also constantly working to dismantle and/or privatize any and all forms of socialist institution in the U.S.A. Whether it’s Obamacare, Medicaid, Social Security, or the U.S. Postal Service, Republicans have been trying to obliterate many manifestations of socialism in the U.S. as a central plank of a conservative political agenda. But why are they doing this, if the vast majority of the Republican rank-and-file voters rely on these programs…? Well because what Republican leadership (and think tanks, and wealthy campaign donors, and right-wing propaganda media outlets) really want to do is eliminate what they call “the halo effect” of any successful government programs, a positive perception among voters which — horror of horrors — threatens to make “socialism” look attractive! You can read about this here: Opinion | Covid-19 Brings Out All the Usual Zombies

This does seem a bit contradictory, to be sure, but it gets even more interesting when we look at the kinds of “socialism” that Republicans actually promote — and rarely oppose. These are things like subsidies to big corporations, huge government bailouts of entire industries, tax cuts to the wealthiest Americans, and lucrative no-bid military contracts. You can read about the GOP’s affinity for corporate welfare here: Corporate welfare state: GOP tax plan showers millionaires with $17 billion tax break and here: How Scott Walker and the GOP Learned to Stop Worrying and Love Corporate Welfare | Michael Rieger

So we’re left scratching our heads…Is all of this a sort of disjointed, self-contradictory hypocrisy without any guiding principles at all? Or does U.S. conservatism have an ideological anchor? Some core values that steer its ship? Well…there really is only one central theme that aligns with all Republican praxis, and that is a devotion to socializing risks and costs, and privatizing benefits and profits. That is, distributing costs and risks across all of society (i.e. all taxpayers), while concentrating profits and benefits in a select few (i.e. wealthy owner-shareholders), with horrific consequences for civil society. You can view videos of Noam Chomsky interviewed about this here: Noam Chomsky and Chris Hedges discuss the history of neoliberalism and Chomsky's new book "Requiem for the American Dream" And also read more about this here: How to Prepare for the Next Pandemic.

There is, of course, another way to describe this behavior, and that was a phrase Adam Smith coined in his Wealth of Nations: “All for ourselves, and nothing for other people, seems, in every age of the world, to have been the vile maxim of the masters of mankind.”