In answer to Quora question "What are some things that as a well-off middle class citizen of the USA, I most likely don't understand about the world?"

That is a brave question to ask. Here is an answer from someone who lived abroad when I was in my teens, and had my U.S.-centric worldview altered considerably through that experience. That adjustment has only been confirmed and expanded as I later traveled and befriended people in other parts of the world. First, here are some widely held views outside of the U.S. about the U.S.:

1) A surprising majority of people in other developed countries view "average" Americans as arrogant, ignorant, utterly clueless idiots. This is in part due to how many Americans comport themselves when traveling abroad, but it is also a result of observing U.S. politics and lifestyle from afar. When Ronald Reagan was President, all over Europe I saw people in bars, private homes and even kids in school laughing hysterically at the astoundingly stupid things he would say and do. And the fact that many Americans still venerate Reagan just amplifies the opinion that "Yanks are dumb." And of course when George W. Bush displayed an even more extreme befuddled incompetence, it just threw gasoline on the fire. Now Donald Trump, someone clearly a more hapless fool than either Reagan or Bush, is a frontrunner in his party. This is just the tip of the iceberg, of course, because there are also Supreme Court decisions, business practices, reality TV shows, talk radio, popular consumer trends and a whole host of other hallmarks of American culture that seem to indicate a very low bar of education, intelligence and common sense. Thankfully Texas, as a U.S. frontrunner in amplifying the Dunning Kruger effect, routinely trumpets its desire to leave the Union. But again, the office of President is often seen as a reflection of a nation's people. And U.S. Presidents have all too often been a very poor reflection.

2) Americans like to "Americanize" everything. Whether a German sausage becomes a Hot Dog, or a complex Eastern religion becomes a weekend retreat growth-and-development fad, or a British TV show is reproduced for American audiences, the U.S. is seen as the great co-opter, customizer and commoditizer of foreign cultures and ideas. This has even happened to the word "America," which many in South and Central America believe applies to them as well.

3) The U.S. is home to a disproportionate number of fearful, sexually repressed, violent people. In part this is just what the U.S. advertises to the rest of the world through its news media, but it's also backed up with some rather unfortunate statistics.

4) American capitalism and charity did not save the world or lift it out of poverty. The belief in "America as the world's Savior" is perhaps the most egregious distortion that many Americans hold dear, but it is considered somewhere between insulting and laughable almost everywhere else.

5) The U.S. pretty much single-handedly created Islamist terrorism as the movement it is today. Not just through economic policies, supporting oppressive dictators, and initiating wars in the Middle East, but by ignoring the plight of muslims around the world for decades. Unquestioning support of Israel over the years didn't help, of course, but that's just one piece of the puzzle. Here's an essay I wrote about this issue on the 1o-year anniversary of 9.11: Growing Beyond an Egocentric Worldview

Okay, so enough about the U.S. After all, focusing on the U.S. or thinking it is the most important nation on the globe is also a distinctly American trait. So here are some things I learned about other cultures while living and traveling abroad:

1) While all people may be fundamentally the same in terms of their emotions, priorities, relationship dynamics, hopes and so forth, the differences between cultures are stunning. Just stunning. What is considered polite in one culture becomes an extreme insult in another. What is taken for granted as routine in one culture is considered extraordinary in another. What is highly esteemed and valued in one culture is considered silly or primitive by another. Shared concepts and behaviors - honesty, affection, anger, curiosity, flirtation, disgust, etc. - are often expressed in entirely different ways in different cultures, and this can be extremely difficult or subtle to navigate at first. And, most importantly, some cultural differences are simply incomprehensible to outsiders - and probably always will be. Which means that interacting with any foreign culture requires a) an openness to learning new ways of seeing the world; b) a curiosity about how other people experience life; and c) competent and trusted resources who can help us navigate such issues.

2) And of course the opposite is also true, in that no matter how different, disorienting or even alienating another culture may appear on the surface, there are always good-hearted, compassionate, caring and generous people everywhere who are happy to engage us.

3) Every culture on Earth has at least one dish of food that it unbelievably tasty and defies all expectations. Very often more than one. Again, however, this requires openness and a willingness to venture outside of our comfort zone.

4) Along the same lines, there are unique clothing styles, architecture, art, music, dance, spiritual traditions and so on that, if we allow ourselves to be immersed in them, will awaken profound appreciation for that culture.

5) Other ways of life around the world are, by many measures, superior to the American lifestyle. You will have to experience this yourself to fully appreciate it, but much of what a middle-class American esteems as "quality of life" pales in comparison to what other (even much poorer) cultures have to offer.

6) What an average American considers "poor" is, in material terms, still much wealthier than how the vast majority of the world's population lives. There are also parallels to this in education, information, healthcare, transportation, etc.

7) Nature, spacious environments, solitude, quiet, privacy and even personal space can be extremely hard to come by in many cultures. Where humans have lived and thrived for many thousands of years in close proximity, cultures have adapted to accept the consequences.

In the same vein (and I think likely as a result of the same pressures), individualism is a bit of an anomaly in most other cultures, and a more communal or collective mindset is the norm.

9) Although I may get in hot water for saying this, speaking as a heterosexual male who thought he knew what female "beauty" was all about before leaving the U.S., I was also shaken to my core by the extraordinary range of feminine allure I encountered elsewhere. And I don't mean a routine sort of animal attraction, I mean being brought to breathless tears by the way a woman looked or moved so differently, or by the unique qualities of her voice as she spoke her language, or by the subtle and fluid expressions of her eyes and hands that were equally unique to her culture. Perhaps these are just the result of witnessing something new and different - but I don't think so. I think it is also that "beauty" has its own special, surprising and precious expression everywhere in the world.

Lastly I would encourage you to check out World News From World Newspapers. It's an excellent way to encounter different perspectives on the same issues from all around the world. Very enlightening.

Comment from Eric Knight: "To be fair, most Europeans feel Barack Obama is worse than Reagan or even Bush, probably due to expectations in 2008 compared to the malaise they find in 2016."

Actually in global polling Obama remained quite strong, with only China dipping precipitously between 2008 and 2015 (nearly 30 points). European approval dipped less (roughly 12 points on average) over the same period, but still remained above 80% if you take Russia and Greece out of the mix (they were never higher than about 40% from the get-go) and keep Great Britain in the mix. Currently, the "global average" is around 65% approval according to Pew Global. So yes, there was disappointment - though mainly over POTUS continuing the drone strike program. But to say Europeans feel worse about Obama than Reagan or Bush...? The numbers don't support that at all. Take a look at the chart from the link below. Bush's ratings were abysmal...Obama's much better.

7 charts on how the world views President Obama 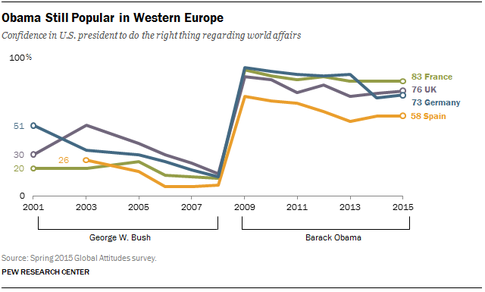